If there’s one thing guaranteed to entertain kids and grown-ups alike at Christmas — or indeed, any time of year — it’s Star Wars Lego. And with Black Friday proving the perfect time to stock up on cut-price gifts before the Christmas shopping goes crazy, this is an exceptional Black Friday deal on the Lego Star Wars TIE Fighter. The price is out of this world, you could say.

The Lego Star Wars TIE Fighter is on sale for £20.99 — that’s a 62% discount off the usual price. As anyone who regularly buys Lego knows, that’s a rare discount. Lego sets, especially Star Wars-themed sets, are expensive and they don’t often drop in price.

The Lego Star Wars TIE Fighter will suit Lego fans of all ages. It’s based on the TIE Fighter from the original movie, so it’s not just a new toy, it has huge nostalgic value too. It’s one of those toys that every grown-up Star Wars fan wished they could have as a kid.

Actual kids will love it too. It’s part of the ever-growing galaxy of Star Wars-themed Lego. It comes with three Lego mini-figures: the TIE Fighter pilot, a classic Stormtrooper, and an Imperial Droid. It’s a medium-sized set, so you won’t be lumbered with the effort of still trying to build it well into the New Year. It’s an afternoon’s worth of very satisfying work.

Black Friday has gone to the dark side with this deal. And we’re absolutely here for it. Use one outlet to power 4 devices with this travel charger 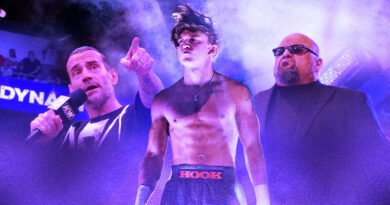 From viral meme to AEW star: Is Hook a look at pro wrestling’s future?